MVP stands for Most Valuable Player, a definition not exclusive to the game. This is a monster with Boss Protocol and MVP Protocol. MVPs are much stronger than other normal monsters and appear on an array of maps throughout the game. MVPs only spawn at certain times, anywhere from once per hour to once every 24 hours since the last MVP of that kind was killed. While MVPs can be defeated by a single person (depending on the class of the player), they are most often taken down by a party of two or more players. Because of the difficulty of defeating an MVP, they give a high amount of experience and MVP rewards given directly to the player's inventory to the player who tank and deals the most damage to it. If the player get killed as the MVP dies, and there's no one else eligible for the reward on the map, someone is randomly selected on the map and receives it. They are also free-for-all, meaning that anyone can attack them, disregarding who found it first or summoned it. First hit on the MVP is only important for loot priority, not the MVP reward.


MVPs will also summon slaves or mobs to make defeating the MVP more difficult. The mob will often times consist of three to nine monsters, sometimes all of them the same, sometimes different, depending on the MVP.

When killed, MVPs not spawned by a player (e.g. Ktullanux) will leave behind a Tomb at the spot in which they were killed. Speaking to the Tomb yields the MVP's time of death, along with the name of the player who received the MVP award for killing it. The time given is in GMT +0. The Tomb will disappear 5 seconds after the MVP has respawned. 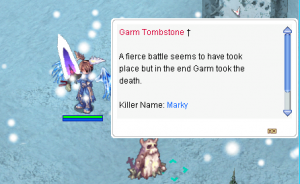 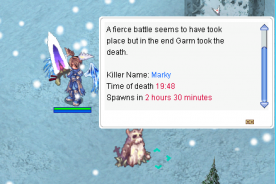 Convex Mirror does NOT work on Biolabs or Unholy Path Bosses!

Unholy Path Bosses and Biolab MVPs count towards the ladder and points but have NO Tombstone markers and Convex Mirrors do NOT work!

There is a Top 10 Ranking for: Daily, Weekly, and Monthly!

Daily MVP Ladder Box: Top 1 is full of many useful goodies but will also have a Rental (1Day)

Weekly MVP Ladder Box: Top 1 is full of many useful goodies but will also have a

Monthly MVP Ladder Box: Top 1 is full of many useful goodies but will also have a

Normal MVPs spawn on a set amount of time with a variance of 10 minutes after the previous one was defeated. For example, if Amon Ra is defeated at 11:00, it would spawn again between 12:00-12:10. If an MVP spawns in multiple places, the two times are independent of one another and the respawn period may be different. Below is a list of all normal MVPs, where they are located, and the time that needs to elapse before it will respawn.

NOTE: Convex Mirror does NOT work on these mobs, but they do count on the MVP Ladder

One to six of the following MVPs (chosen randomly) will spawn every 60 minutes after the previous MVP is defeated on Somatology Laboratory 3. These are all classified to be of High Difficulty.

NOTE: Convex Mirror does NOT work on these mobs, but they do count on the MVP Ladder

One to seven of the following MVPs (chosen randomly) will spawn every 60 minutes after the previous MVP is defeated on Somatology Laboratory 4. These are all classified to be of High Difficulty.

MVP Souls drop from every MVP in the game at a 6% drop chance.
Currently used in a Quest for Refine Hammers.

Mid-Grade Loot Box found only in MVPs and various Mini-Bosses, dropping at a 3% rate!

This is the rarest drop in the game at 0.01%, and it's only found in MVPs and various Mini-Bosses. Test your luck with RNG gods and see if you are blessed enough to loot one. Filled with only the best stuff!!